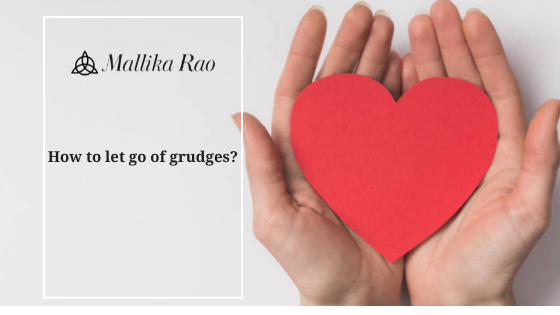 How to let go of grudges and remorse?

I was listening to Diane Von Furstenberg’s, where she spoke about the time her mother spent in a war camp in Poland. The young 22 yr old girl who already endured a lot of torture, met a lady in the camp who spoke German and soon became her friend.

One day all the prisoners in the camp were made to stand in a line and the soldier would point the direction they are supposed to go. Behind the soldier was his higher official standing and watching this process gravely.

The German woman was asked to go right and the young girl quickly followed her.

The soldier let her do that, but the officer caught her, threw her on the other side, and whipped her. Diana narrates, that the young girl was filled with hatred for that man.

Turns out, people who were going right were being sent to the Gas chamber. The official actually saved the girl’s life.

So often, we look at them in life or the people who put them in our path and are filled with so much rage and remorse, isn’t it?

If you look back, can you see how these challenges actually forced you to make the right choices and made you the person you are today?

Some of them could even be the best thing that has happened in your life.

Look at your situation now or a grudge you are holding in your heart about someone. Ask yourself, because of this situation what different actions have I taken. When I did make those choices how did my life changed for the better?

Some losses are irrecoverable, but they may have made you wiser, stronger, and empathetic. Do not see yourself as the victim. Instead, take a step back and look at this entire scene as if you are watching a film. From this vantage point, do you see a silver lining which you missed at that point, but now looking back you could see how that difficult person or the circumstance guided you to take that risk, that chance and brought you blessings you did not anticipate/

Remember, “Not all storms come to disrupt your life, some come to clear your path.”